Beach Bum Babies...and a few others 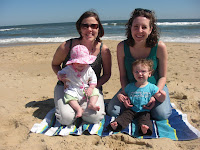 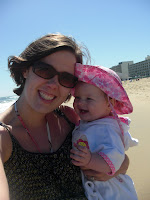 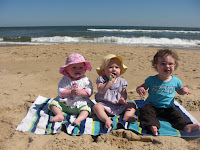 We have had the most gorgeous weather here lately so the girls had to get in their first trip to the beach of the summer. It was fantastic! 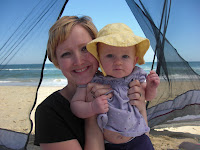 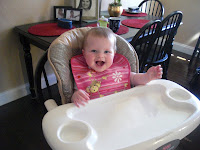 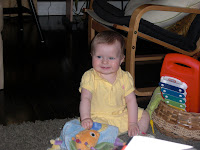 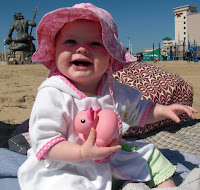 Although I won’t say that this is my new favorite book, I really did enjoy the read and was very impressed once again with Lewis’ ability to write and think on a very deep level. Perelandra is the second book in his space trilogy. This series is science fiction and talks about Ransom (the main character) visiting planets in outer space. I’m not much of a science fiction person myself. I will sit through a science fiction movie with someone if they really want to watch it, but it definitely wouldn’t be my pick. These books can be a little confusing at times because he is explaining such strange things...you can imagine some of the strange things you have seen in science fiction movies, now consider just reading about them in a book. Sometimes I was a little stumped. However, I think the most incredible thing is that Lewis uses Perelandra as a sort of analogy to the events in the Garden of Eden between the Serpent and Eve. He weaves the tale around a lone woman that he meets in Perelandra. They have many interesting conversations, but when they are joined by a man possessed by the devil it becomes a battle. Ransom trying to help the woman make the right decision and the devil working to trick the woman into making the wrong decision. The conversations are deep and I couldn’t help imagining Lewis in my mind sitting with the Inklings and discussing the topics he does in Perelandra. I don’t want to tell you how it ends....what the lady decides, but I will say it was a new way for me to look at our redemption, and I enjoyed that.

Posted by juliechall at 11:03 AM No comments:

break out the bubble-bath 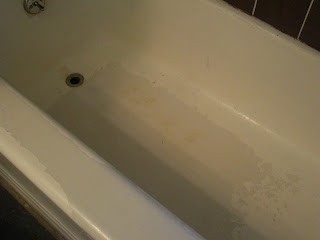 I don't know how well you can see our "pre-reglazed" tub...but it was pretty nasty. The person who lived in our house before us painted it and it was chipping like crazy when we bought the house. Well, obviously it's taken a while to get to it, but finally we had it reglazed this last week and it is awesome!!!! I took my first bath ever...after living here for almost four years :) So, if you have a massive tub that will not be easy to be removed, try reglazing - I highly recommend it. Oh...this next pic is Brynne of course...I couldn' t leave her out. Then the last pic is the new version of the tub. 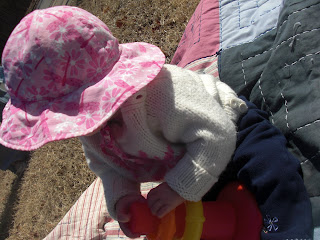 We are lovin' the sunny weather lately! 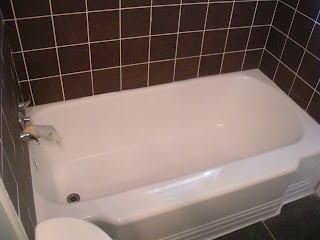 I've been a little behind in posting on these, but so far I have conquered 3 of the books on my list. Some coincide with what Julie has read, so sorry for the redundancy.

I will admit that halfway into this book I was slightly disappointed. When I purchased the book

from Barnes and Noble I was under the impression that I was buying the book by George Sayer. Jack’s Life turned out to be written by Douglas Gresham, Lewis’ step

ugh his marriage to Joy Gresham. This book is written from the perspective of one who obviously looked to Lewis as a hero. Fr

om reading Gresham’s account one would think that Lewis could do no wrong. Gresham

writes in almost a journaling style, recounting the history of who Lewis was as a person. It is not his intent to take apart or pass judgme

nt on Lewis or his works, merely to expose his history from the viewpoi

nt of one who was influenced by him and loved him. I found Jack’s Life to be a fun read, although not incredibly thought provoking.

Jack is a delightful biography of the life of the great literature professor and popular theologian, C.S. Lewis. George Sayer, the book’s author, and a student and friend of Lewis, engages the reader through his depiction, observation, and, at times, frank judgment of Lewis’ life.

This book is the third biography of Lewis I have read, the first being Surprised by Joy, Lewis’ selective commentary of his own life, then Jack’s Life, by Lewis’ stepson, Do

uglas Gresham, who very obviously witnessed all that was bright and good about C.S. Lewis. Jack was different than these, as it provided an outside perspectiv on the man from one who was a clos

e friend, and, with all respect, did not see Lewis as some kind of superhero, although a great man.

ooling, war experiences, time at the University, and relationship with Joy Gresham, on to his

death. All of this provides a backdrop for the keen insight Sayer provides into Lewis’ literary works. All of this he accomplishes with no attempt to hide the warts of Lewis’ life.

was no surprise to find that Lewis had his struggles. Sayer recounts his unhealthy relationship with his father following the death of his mother, His sexual addiction in his youth, his struggle with morbid introspection, and his decline into atheism all right alongside of his description of Lewis’ brilliant mind, his loyalty to his friends, His life changing love for God when he found Him, and his unfailing generosity.

In many ways I found myself identifying with Lewis through Sayer’s portrayal of him: his love for beauty alongside his rationality - which contributed to his coming to Christ, His struggle and then release as he learned to walk with God, his love for laughter and good natured criticism and discussion at the pub among friends at Inklings meetings, and his ability to see and love the fingerprints of God everywhere.

In other ways I was intrigued and surprised by him. He had no taste when it came to furniture or indoor decor, possibly because of

the rationing during the wars - I certainly imagined him sitting in an overstuffed leather chair with a good book, smoking his pipe, surrounded by rich bookshelves in a lavishly carpeted and furnished library, but it seems he preferred the simple to the elegant. Furthermore, He thought the life of an author irrelevant to his literary works, a thought that is foreign to me probably because of hermeneutical training (though I’m not sure he would have held this view in regard to Scripture). Then the reasoning behind which he justified his relationship with and marriage to Joy Gresham, a married woman when he met her, was certainly mystifying.

Jack has enriched my understanding of and appreciation for C.S. Lewis. It is both fun and insightful. I would certainly recommend it as a window into the life of this man who has impacted so many by his wit and wisdom into the life of God and relationship with Him.

f, anger, tragedy, confusion, and misunderstanding. It is a moving story. I found myself weeping through some passages for joy and delight through the presentation of the depth of God’s care for us and the prospect of knowing Him fully, and weeping out of sorrow as I found myself identifying with the portrayal of both pain and delight in God.

I think Young touches the important issues of God’s sovereignty through tragedy, the nature of relationships and image-bearing, love, choice, and the deadness of the face of much of “cultural” Christianity. I found much to enjoy about the concepts of face-to-faceness, love, submission and joy in the trinity, about the relational idea of our walk with God versus the deadness of religion, about some of the explanatory conversations between Mack and God, especially the depiction of the Spirit, and about some of the ideas of life in God and image-bearing.

ever, I did find cause for concern as well. To me, it seems that Young’s fault is that he is reacting at the same time as trying to be deep - maybe a conflict of agendas. He will make great statements about

the nature of the Godhead, but then smack of heresy in the way in which he plays out that statement. For instance, he declares that jesus was demonstrating true humanity through miracles, a statement I enjoy and am comfortable when the emphasis is on Christ’s joyful relationship with and submission to the fore-ordained plan of the collective Trinity regarding redemption. This is the very reason why He did not make rocks into bread to pacify a human craving, because He was, as a man living out the perfect relationship He had with the Father and Spirit. However, Young goes farther to say that jesus has no power in Himself, but its only derivative of the Father and Spirit, as if his humanity somehow robbed him of deity. This if false. True, Jesus never operated independently of the Father or Spirit, but when has he ever done this anyway? It certainly did not start with the incarnation. And what about the fact that Paul says that right now Jesus upholds the universe by the word of His power? That would make it seem to be a very grave and erroneous statement indeed to say that Jesus has no power in Himself. Somehow I felt that much (not all) of Young’s depiction of Christ was lacking the majesty and reverence He deserves.

A second cause for concern was Young’s depiction of God as a cosmic “firefighter” of sorts. The premise is that love will never force someone to do something they don’t want, which premise I find faulty. God would never force himself on us, but longs for use to lose our lust for independence and come running to Him. Nothing “evil” is part of His plan, but is purely the result of human choices which God did not design, although He is skillful to still get what he wants in the end through his putting out of the fires. This goes back to the ancient question of sovereignty and freewill, which is not easily solved. But I ask, is this the best comfort for someone suffering through tragedy? When Mack asked why God did not stop the brutal murder of his daughter, its as if God’s answer is “my hands were tied by my love; my love rendered me unable to stop this.”

I feel this book has great merit in its thought provoking presentation of issues that need to be wrestled with, some that often never are touched because a certain thought has been accepted for so long. The message of relationship with God through Christ and the need to forgive are essential. But as with any book, we need to chew and spit. This of course needs to be read with a discerning (not necessarily prejudiced) eye, never replacing books such as this for actual deep, theological study of Scripture itself. 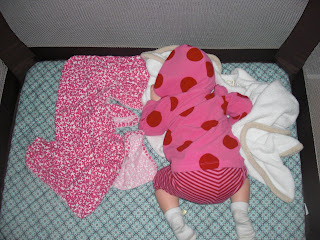 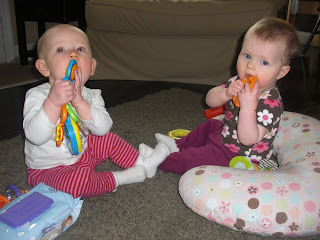 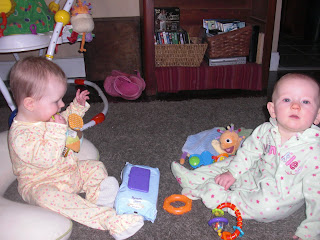 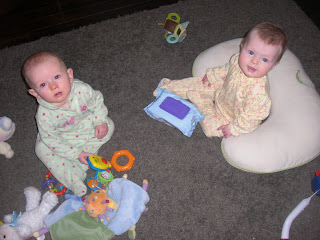 I had a fun time hanging with Cade and Brynne last weekend. It was a little crazy, but not as scary as I thought. You can tell that Cade was ready to be done by the picture at the top...how I found her right before I took her back to mom. They are so funny together. All I have to say is that those out there who have had multiples...you are awesome!
Posted by juliechall at 3:18 PM 1 comment: