A Poem for Julie on our fifth anniversary 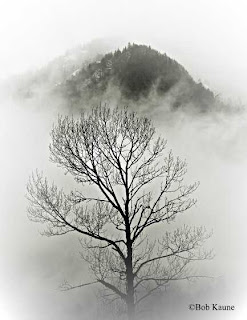 The Sun breaks through the morning mist
Illuminating the dust suspended in its beam.
I hear the slow music of your breathing as you dream beside me.
We sit in silence taking in the songs
Of all Creation surrounding us.
Its harmony is deafening.
We are lost in the thought of this reminder of Beyond,
And in the aroma of the coffee we sip.
There is no need to speak.
The talk is of what may be
As we listen to haunting melodies
That remind us of Home where we have never been.
But we are home.
And you are mine.
Posted by Rob H at 10:50 PM 1 comment: 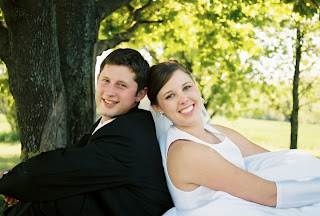 I say bliss, because that is truly what the last five years have been since May 30, 2005, the day Rob and I said "I do". It's hard to believe that the time has gone so swiftly and that we are already parents to an almost one-year-old. I am constantly amazed and so grateful for the sweet relationship God has given us. We often think - can anyone be as happy as we are together?
I have loved this sonnet for a long time. I guess I'm posting it because I'm realizing already that there are so many things we will experience together on this journey of marriage, and I cherish the way our love grows and matures through each challenge. I pray that this continues to happen abundantly in the future and for however many years we have together. I thought about writing my own poem, but hey - Shakespeare is a little better with words than I am (a little).
Sonnet CXVI
Let me not to the marriage of true minds
Admit impediments. Love is not love,
Which alters when it alteration finds,
Or bends with the remover to remove.
Oh, no! it is an ever-fixed mark
That looks on tempests.. and is never shaken.
It is the star to every wandering bark
Whose worth's unknown, although his height be taken.
Love is not Time's fool, though rosy lips and cheeks
Within his bending sickle's compass come.
Love alters not with his brief hours and weeks,
But bears it out.. even to the edge of doom.
If this be error and upon me proved,
I never writ, nor no man ever loved.
- William Shakespeare
Thanks for letting me blubber a little - we are truly blessed!
Posted by juliechall at 8:26 PM 3 comments: 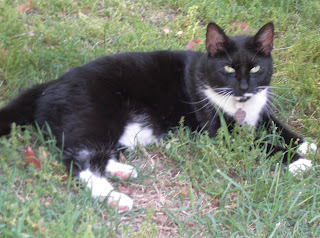 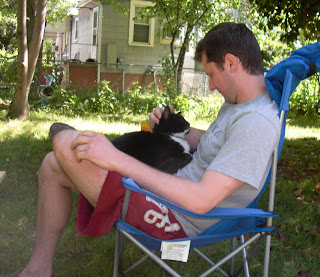 Well - here's the story. Rob and I are both allergic to cats. So neither of us has a huge affinity to cats. In general, Rob likes animals a lot more than I do. We are in constant conversation about his desire to get a dog and mine not to. I don't hate animals, I'm just too practical to own one. I'm already dealing with a child's poop - why a dog? I also won't deal with the hair in the house, and he really doesn't want an "only outside" dog. Anyways, we are at a cheerful stale-mate right now. Or maybe I say that because I'm winning??? So why the cat pics? Apparently this cat didn't get the memo that we don't want a cat. It has taken up residence in our yard and any time we are outside, it comes around looking for attention. It's the kind that climbs in your lap or rubs it's body against yours....getting nasty black hairs all over you. Obviously, Rob showed it some extra special attention the other day - hopefully that didn't encourage it too much. One thing that is true - Brynne goes crazy over animals - cats and dogs are the best. But she gets ticked if they won't come play with her and let her pull their hair out. She'll get it some day. But I'm not sure - have we created an animal lover or is this just a passing phase? I shudder to think I would have two people driving me crazy about getting a dog....we'll see...
Posted by juliechall at 9:45 AM 6 comments:

If you never have, I recommend... 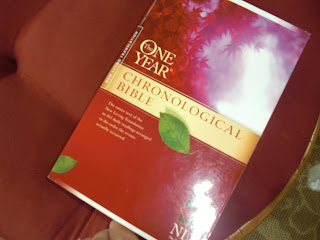 The Chronological Bible. Rob and I have enjoyed this so much over the last few months. We originally started last year reading through the Bible chronologically by using a website. This worked fine, but it was kind of a pain keeping track sometimes and flipping all over the place. We ended up picking up this copy a few months ago and it has made it a ton easier. I have really enjoyed reading the Bible this way for a change because it puts so many things together in my mind - I just feel like I have made so many connections that I haven't before. Rob and I have talked a lot lately about how important it is to see the whole story of scripture. How all of it points to Christ from beginning to end. Reading it chronologically really helps put the story together. We normally use ESV, but Rob picked this one up in NLT, which also helps give you a smooth read. It's important to take time for slow study as well, but I think it has been great to take this time to just read scripture in one constant, "forward" motion. And as a mom - it makes it nice too, because whenever I sit down - whatever situation or time I have - I know exactly where I am and what's going on. I totally recommend it!
Posted by juliechall at 12:41 PM 4 comments:

The most wonderful time of year....no not Christmas...

Strawberry pickin' time! It now officially feels like summer to me, because I have been strawberry picking. My sister and I went this morning, and I have to say the strawberries we get here in VA Beach are awesome - the best ever! It is one of my favorite things to do every summer. Thanks to my honey for watching both girls so we could go! 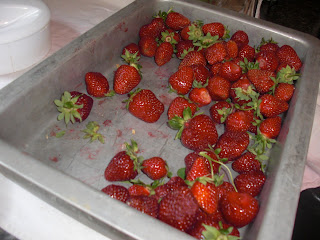 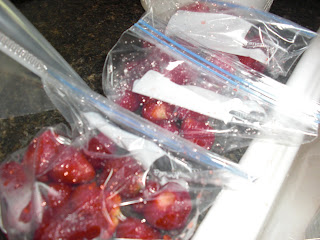 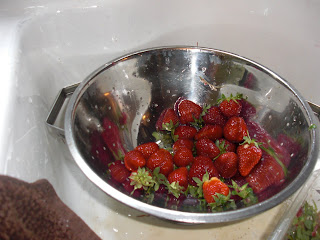 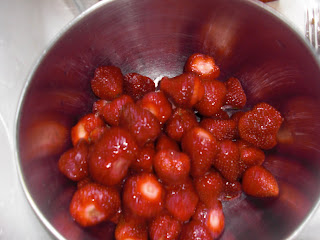 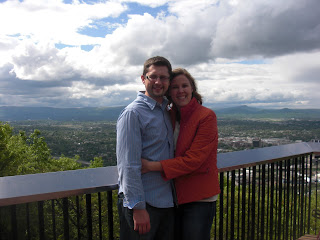 This was my first Mother's Day with Brynnie outside my tummy, so it was very special. Rob and Jordan made an awesome lunch for me and Sue and sent us out on our own for dessert. It was a blast, but we had a hilarious experience at Baker's Crust. I thought I would share... 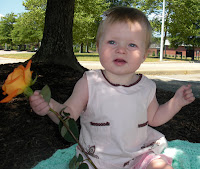 First of all...check out the lady in the background. If you can click on the pic and enlarge, you will see she is quite the character...with five inch long pink nails curling around her lovely snack...ewwww

We arrived, and were seated by a hostess. Sue, being the sweet person she is, commented on her dress. The hostess immediately goes into an excited monologue about her dress, recent hair cut, style preferences (I seriously thought Sue knew her it was so detailed) and continued until a manager grabbed her to seat other guests.
Then our sweet waiter arrived. He was probably early twenties. I asked for a recommendation for dessert and he started talking but had to apologize for having gum in his mouth and not being able to communicate clearly. The rest of that conversation I couldn't get my eyes off the green gum rolling around in his mouth.
Last, and most funny to me, is that we ordered coffee and dessert-ONLY- and a few minutes later he arrived with bread and butter. Wow, what a great appetizer :) Well, as you can see, dessert was amazing, so I can't complain, but we really had a good laugh about our experience. 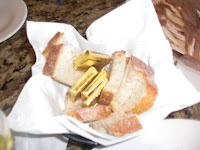 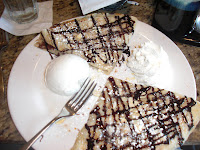 addicted to the flea....market that is 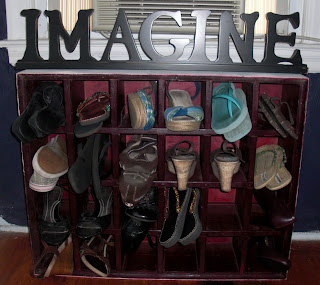 These two items are just a couple fun things I have found at the Olde Towne Portsmouth Flea Market. They have it the first Saturday of every month, and I love it! The shoe box used to be a letter box, and I am always looking for ways to organize. I also love - what are these called? - wooden words??? Anyways, I found this one for $3 last Saturday. 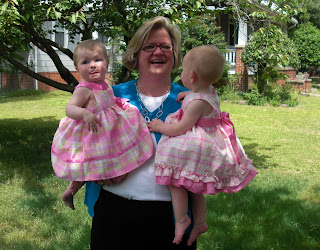 The best part about this flea market was that my mom was able to be here for the weekend. We had a blast. She said that she was coming for my sister's birthday, however we knew it was really for the flea market and her sweet granddaughters :) Unfortunately, at ten months they just won't both look at the camera and smile at the same time....hmmmmm 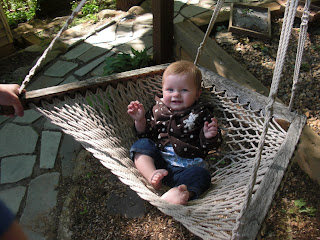 This has nothing to do with the flea market but I had to add it. We were in Blacksburg and Charlottesville with Rob's fam last week. This swing is at his aunts' house in Charlottesville and Brynnie loved it! More pics to follow from this trip!
Posted by juliechall at 1:25 PM 4 comments: